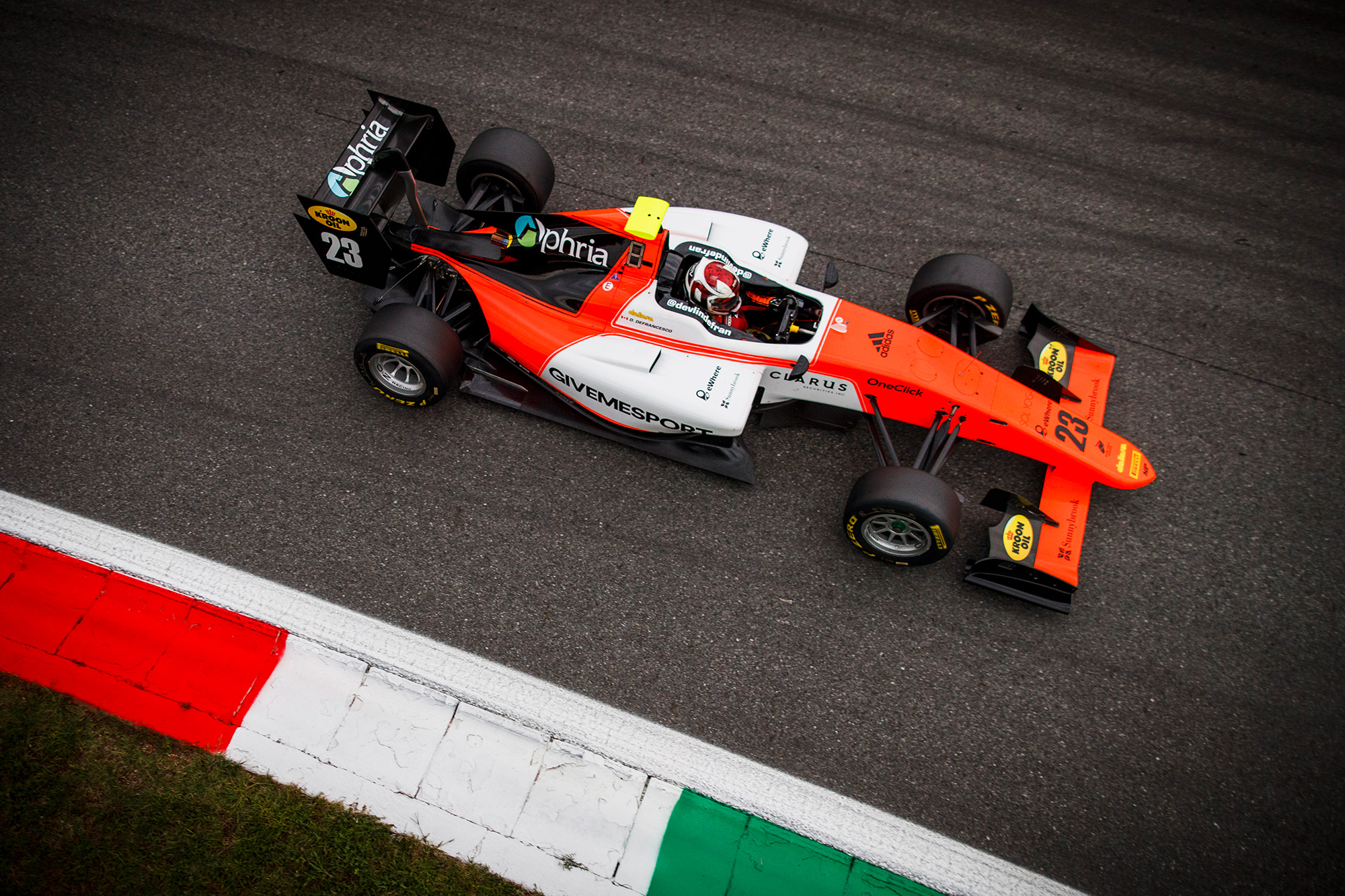 It was a promising weekend for Devlin DeFrancesco, as the GP3 series headed to the infamous Autodromo Nazionale Monza. Located just north of Milan, dubbed the ‘Temple of Speed’ due to it’s high speed straights and gruelling long right-hand turns it provides the perfect recipe for on-track battles with ample overtaking opportunities.

The grid were due to get their first taste of the Italian circuit early Friday morning however mother nature had other ideas. The rain was relentless, causing rivers down the paddock and showed no signs of letting up. With the conditions deemed unsafe to drive the session was canceled. Due to the back to back track action that is a Formula 1 weekend the full 45 minute session could not be rescheduled with the organisers only managing to squeeze a 10 minute session straight before Qualifying.

‍
With little time to get to grips with the track, it was an intense session for all of the drivers. Making the most of the limited running, Devlin explored several different lines to end the session fourteenth overall. Heading out for qualifying just five minutes later, he couldn't quite piece the lap together during the first stint so returned to the pits to regroup.

‍
Ready to go again, armed with a fresh pair of slick tyres, he returned to the track when in a cruel twist of fate, the skies opened again. As track conditions worsened significantly the young Canadian-Italian was unable to improve on his earlier time. Although disappointed with his unrepresentative time the eighteen-year-old stayed undeterred knowing that his pace was good enough to fight his way through the pack the following day.

‍
Saturday's race was another wet affair. Getting away from the line cleanly despite battling against standing water and incredibly poor visibility. Putting his  his head down, he focused on making up as much ground as possible, battling his way into the midfield group. Misjudging his line slightly whilst fighting for position with Menchaca and Calderon, Devlin nudged the former accidentally. Receiving a 5-second penalty for the error the young racer pushed hard to create as big a gap as possible behind him to reduce the impact of the penalty.
‍
Reflecting on one his best finishes despite the poor conditions and time penalty Devlin commented:

“The race was in tricky conditions – the extreme amount of spray, the track drying up at the end so anything that could have happened, happened."

"Overall we were much stronger today, a vast improvement from yesterday, which was one of the tougher days that I have gone through”

‍
With Sunday’s grid set from Saturday’s results, Devlin headed out from his best grid position so far, firmly within the midfield battle in thirteenth. Making a good start of the line he immediately engaged in a on track battle with Correra, making a small mistake whilst fighting for position, Correra spun off the track. As it was not immediately clear who was at fault, it was announced the incident would be investigated post-race.
‍
Keeping his nose clean for the remainder of the race, Devlin diced well with the cars around him crossing the line thirteenth. Although in no means intentional, the Stewards deemed Devlin was at fault for the collision, adding an additional 20 seconds to his final race time demoting him to fifteenth overall.
‍
Reflecting on the weekend as a whole Devlin commented:

‍“The weekend started hard, but considering how it started, the way it ended, I guess you could call it a little win. It’s not where we want to be but my head is down and we’re working on improving and getting back to where we know we should be.”

The series now takes a break before heading to Sochi, Russia for the first fly away of the season at the end of September.