Double Podium on Debut for Devlin in Asia. 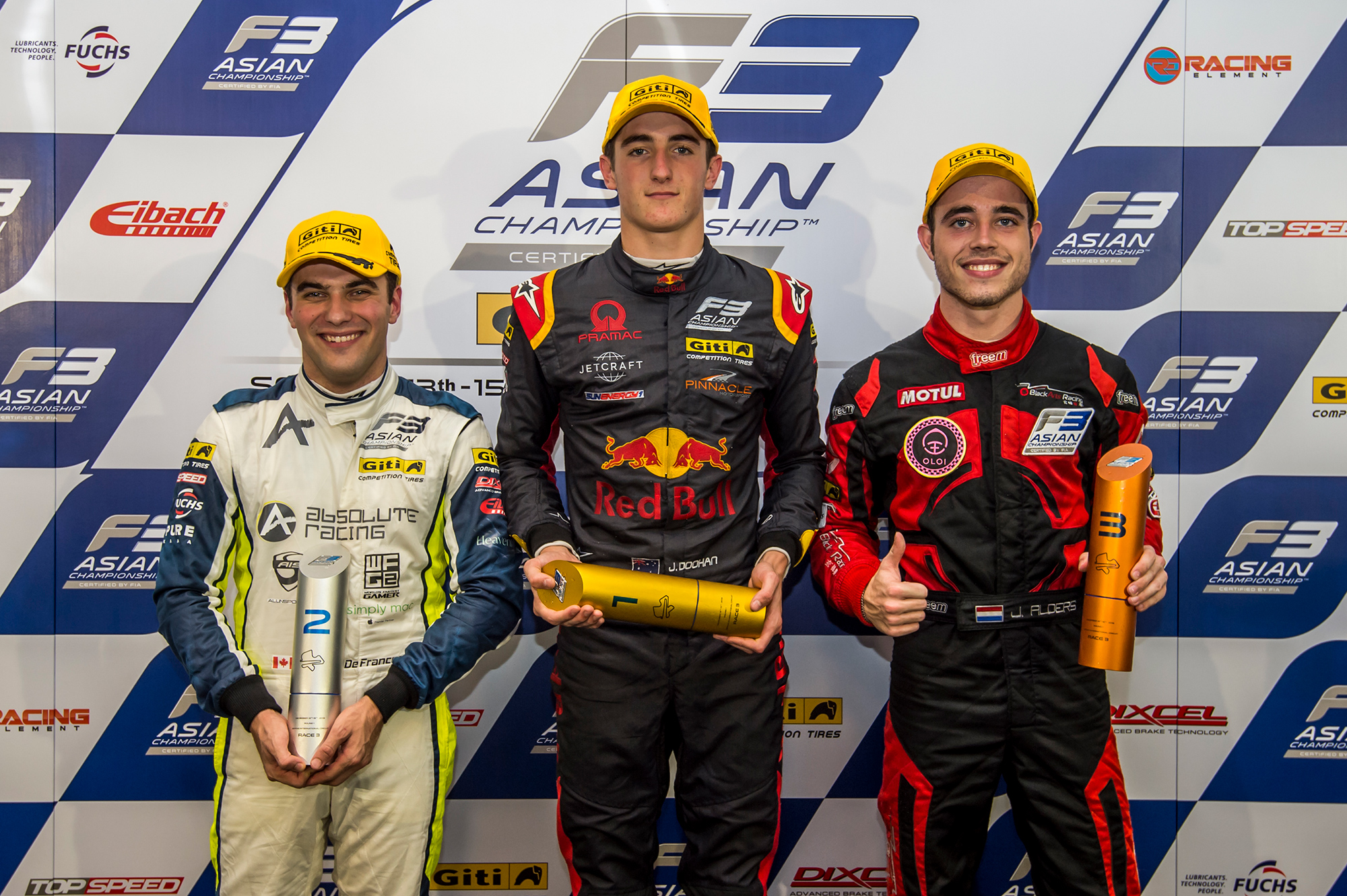 Double Podium on Debut for Devlin in Asia.

Devlin DeFrancesco had a near perfect start as the F3 Asian Championship certified by the FIA got underway this weekend, with two podium finishes immediately catapulting him to 4th in the Drivers’ Championship.

With a hectic schedule, the series kicked off this weekend at the Sepang International Circuit in Malaysia. A weekend of firsts, Devlin rapidly acclimatised to both the new circuit, car and team, ending the first free practice session at the sharp end of the standings in P6.

Despite struggling somewhat to find the sweet spot with the balance of the car during the first qualifying session, the young Italian-Canadian claimed an 3rd row start for the first race of the season. With the qualifying sessions so close to each other there wasn’t much time to implement any changes, however Devlin went one better in Q2 to claim a spot on the second row of the grid for the third and final race.

‘It’s been quite a learning curve with the car and the tyres,’ he said. ‘Q1 I wasn’t too happy with, Q2 was in a better range, we were in the fight for pole.’

Things couldn’t have started better for the talented 19 year old in his first race of his campaign, with a fantastic getaway catapulting him from fifth to lead the race on the opening lap. With faith in his pace, Devlin kept his head down and pulled away from the chasing pack, before progress was halted, as a safety car brought out to remove Tatiana Calderón’s stricken car.

Despite maintaining his position well at the restart, his rhythm and pace had been hampered, to the benefit of the two drivers on his tail, who managed to find a way past in the closing stages of the race. Nevertheless, it was still a hugely impressive season opener from the Absolute Racing driver, who not only finished on the podium, but also set the fastest lap, giving him pole for the second race.‍

‘I was fully focussed on the race. We maximised the start, got the lead and I was in control. Then the safety car came out and we seemed to lose a bit of our pace, but we now understood why. Jack (Doohan) and Joey (Alders) managed to get past, but I just kept it P3, kept out of trouble and brought the car home on the podium.’

‍Starting from pole gave Devlin had another golden chance for solid points, but from the outset it was clear something wasn’t quite right. Dropping back as he struggled for the speed he’d exhibited in race one, he found himself down in ninth as the group of drivers took the chequered flag. It wasn’t the race he’d hoped for, but still felt confident that he could redeem his weekend with the final race.

Starting from the front once more in the third and final race of the weekend, Devlin had secured himself a healthy second row start after his impressive qualifying efforts on Friday. In a closely contested opening lap, Devlin found himself caught in a mass of cars and dropped a few places. Undeterred, with impressive pace, he stormed back through the pack, regaining 4th position on lap 4, a position he held until lap 12. Once again demonstrating his great race management skills, honed during his 2019 FIA Formula 3 Championship campaign, Devlin capitalised on a mistake made by Ukyo Sasahara to claim third with three laps to go. Determined to continue this great charge, with just half a lap to go, his constant pressure upon second placed Joey Alders, caused his rival to run wide, allowing Devlin to capitalise and finish on the second step of the podium. A fantastic end to a successful weekend.

‘We dropped back at the start, but we had a strong race with good speed, and we made our way through the field,’ he said.

The results leave him in fourth in the championship heading in to round two in Dubai, on the 10th-11th of January.